The images above are from discussions in July 2021 that sparked after an incident in Wi Spa, L.A., in which a woman complained about a male person with a penis wandering around naked in the women's section of the nude spa.[4][5][6] Without any actual evidence, trans activist groups cast widespread doubt on the event and managed to get mainstream and local media publications to report that the incident "might have been staged."[5][7][8] It's noteworthy that while some trans activists went the route of claiming that the incident must have been staged, others chose to openly defend the principle of an intact male using female-only spaces (see images above), hence rendering moot the question of whether the incident was or wasn't staged.

After the incident, another woman came forth about the same thing having happened to her in Wi Spa in 2018, and agreed to a detailed interview with journalist Anna Slatz about her experience.[4]

Some trans activists reacting to these stories went as far as saying that women were at fault for looking at the male person, that they are the real sexual aggressors for eyeing the male person in the female-only section, or making jokes about how the women must have been aroused by the man.

Another logical conclusion of "trans women are women" is that males who identify as women get to play in women's sports. This idea is indeed widely supported by trans activists, and has been applied in many sports events, leading to male athletes at times massively overpowering female competitors and taking the first spot / gold medal. See the above linked page for details on this topic. 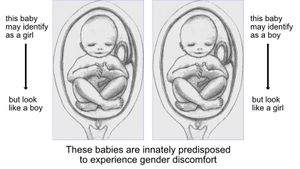